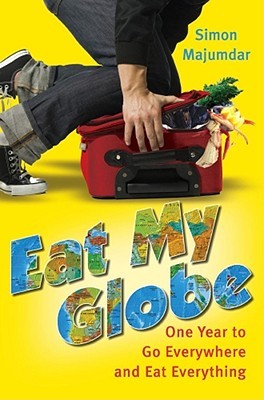 It’s interesting how one’s perspective changes as we grow older. When I was in my twenties, travel to me was all about shopping. When I reached my thirties, travel was now mainly about visiting all historical and cultural landmarks possible.  Today, with all the global brands available in Manila, shopping as a travel priority, has taken a back seat. And while visiting landmarks is still a great motivator, I find that I have the greatest  motivation in building my family’s annual travel plans around  what special dishes we are going to eat, what restaurants we are going to try, and what cooking schools in that country we are going to enroll in for our family’s cooking lessons.

I am even more inspired now after reading the funny, amazing and truly enjoyable “Eat My Globe,” a one-year odyssey of going everywhere and eating everything, written by a half-Bengali, half-Welsh, food blogger who, in the midst of a mid-life crisis, left a twenty-year career in publishing to concentrate on food writing !

Simon Majumdar is one joyous travelling soul – while his detailed descriptions of the dishes he tasted and how they were cooked were nothing short of delectably outstanding, it is his observant eye, and down-to-earth honesty as he comments on his experience with a particular country’s culture, that makes the book not only an extremely interesting, but certainly a highly educational read as well.

I could personally relate to his experience in mainland China, where he shockingly saw men eating their noodle bowl supper while simultaneously stooped over the toilet doing their thing ; and where local Chinese tourists would all wear matching caps as a group, and would do only what their guide would tell them to – sit here, take photo here, wait there – with no one  showing any individual thought or initiative. But the highlight of  Simon’s China saga was truly his vivid descriptions of encountering braised dog, fried pig’s penis and stir fried dried cane rat – and having to eat them all too ! Hilarious !

Because Simon is half-Bengali, his chapters on India are to be read and chewed on slowly, for best enjoyment. He visits Delhi, Mumbai and Kolkata (city of his roots) – and concludes that even if India had the lowest standard of hygiene among all the Asian countries he visited, and the stench in the Indian markets make China’s markets “smell like a bed of roses,” still and all – it is in India, in Simon’s opinion, that the food “cannot be bettered anywhere for its range, variety and quality. “ And he further explains why – the seven union territories and twenty- eight states that form the giant Republic of India are showcases of influences that today we call “fusion”- “where the Mongols in the north brought grilling and the subtlety of cream and almonds, to the southwest where the cooking of Goa shows the Portuguese influences of garlic, chilies, tomatoes and vinegar.” What a learning ! And, what a wonderful mélange of cultures  and flavors India apparently is – which certainly inspires me to research more on Indian food and to plan another trip there, now with the aim of experiencing this great gastronomic capital.

But India was not the book’s biggest surprise for me. It was,happily, excitedly – the Philippines ! And what a thrill to read our chapter ! The side story here was, Simon Majumdar actually has a Filipina aunt, Evelyn, who persuaded him to include the Philippines in his itinerary. At first hesitant, because of the Philippines’ image from Western media stories of crime, corruption and crippling poverty, Simon relied on the feedback of a fellow-food writer, Robin Eckhart, who called Filipino food “one of the undiscovered treasures of Asia,” and on this basis, he proceeded  to Manila. The result was a jubilant entire chapter filled to the brim with glowing praise and admiration, not only for his newly discovered cuisine, but equally for the hospitality and goodwill of the Filipino people he encountered, and the breathtaking sceneries he saw while travelling to the outskirts of Manila!

How observant Simon was to point out that if there is anything Filipinos love, it is talking ! And if there is any topic we love to talk about, it is food. From his viewpoint, food was like a psychotic obsession of the Filipino people, a kind of obsession which, he claims, he has not seen elsewhere in the world except in Mexico, which, curiously, shares a Spanish heritage with the Philippines.

I could not help but feel proud and happy for our own culinary icons led by gourmand Claude Tayag, who together with his wife, patiently brought Simon through an unforgettable voyage of culinary discovery which propelled his imagery of Filipino cuisine to new, towering heights. With the Tayags, Simon tasted paco salad, bulanglang, fried hito with balo-balo, and a seafood kare-kare, that was so delicious it turned up in Simon’s list of the best twenty dishes of his trip! Also to be mentioned is magazine editor Carlo Tadiar, who took Simon to taste other Filipino dishes – daing na bangus, chicken gallantina, camaru, Bicol express, Cebu lechon, sinigang, crispy pata and adobo – for sure, all perfectly cooked from family heirloom recipes, and all excellently chosen to demonstrate our “clean, sharp, savory flavors and the crunch we demand from at least one dish in every meal.” I could only say to myself – thank God they did not expose Simon to balut !

Eat My Globe is the result of a visit to thirty countries, documented through twelve thousand images of encounters, with hundreds of foodies across the world.

If you love to travel and food is your focus, if you need a reference guide and ideas on what to eat and where, around the world, if you enjoy reading cultural observation and exploration written in a witty and humorous, but vividly descriptive style, then  “Eat My Globe” is the book for you.  Without leaving your home, you will feel like you are right there with Simon Majumdar, with all your senses alive and kicking, taking every step, enjoying and savoring every bit of his amazing eating adventure ! Enjoy !